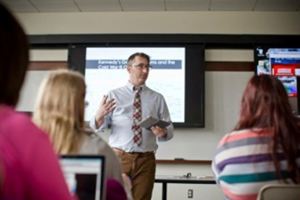 But, Jeffrey Fortin, assistant professor of history at Emmanuel College, will tell us about an intriguing example of historical identity theft dating back to the early 1800s.

Born in Hawai’i, Dr. Jeffrey Fortin learned to walk while aboard a sailboat, which may be why his research and teaching interests revolve around the sea and the maritime world. Academic tourism is a great benefit of being a historian, with his most recent project took him from London to Halifax, Nova Scotia to New Bedford, MA and many spots in-between to conduct research in sometimes dusty, sometimes state-of-the-art archives. Once he received his PhD from the University of New Hampshire in 2006, he began a tenure-track position at SUNY – Oneonta, where he stayed for 5 years until being hired by Emmanuel College, Boston in 2012. He is currently writing the first new biography on Paul Cuffe — a celebrated African American sea captain, entrepreneur, philanthropist — in nearly 30 years.

Identity theft looms over modern Americans as our busy, cloud-based lives leave us susceptible to hacked bank accounts and stolen passwords.  But did you know that identity theft has been a problem since the founding of the United States?  As I began to research the life of Paul Cuffe, early 19th century’s wealthiest African American sea captain, entrepreneur, and philanthropist, I came across an all-too-familiar tale of identity theft buried in the mounds of his correspondence housed in New Bedford, Massachusetts Free Library.

News spread slowly in 1816, allowing a man to travel relatively undetected from Boston to Philadelphia claiming to be Paul Cuffe, and sometimes his son, so he could take out loans and credit.  He even used Cuffe’s good name to gain an apprenticeship with merchant Ira Potter in Albany, NY, which ended one month later when the imposter stole his master’s horse. This imposter threatened Cuffe’s reputation, earned after years of honorable business transactions. Newspapers around the Atlantic chronicled Paul Cuffe’s propensity to loan friends money and donate funds to build schools for needy children. If he were alive today, TMZ would follow Cuffe looking for dirt on the celebrity, but they would only find a good man, not a horse thief.

Authorities caught up with the imposter in York, Pennsylvania before he could irreparably damage the venerable sea captain’s reputation. The man’s identity is not clear because he gave authorities several different names, but he was jailed as a result of his crimes, although not for the 1,000 years Cuffe desired. Cuffe stood as a beacon to what free blacks could achieve, but what would the public think when they learned of his conniving imposter?   After the arrest Cuffe vented to a longtime friend, stating, “beware of wolves in Sheeps [sic] Clothing” — potent words that we should all heed today. Interestingly, Cuffe was not troubled by the blow to his personal finances; rather, he worried that this “scoundrel’s” behavior would sully Americans’ views of free blacks. White Americans already viewed free African Americans with fear and skepticism, and Paul Cuffe believed it was his duty to change that by representing his African brethren throughout the Atlantic world as a sober, trustworthy, Quaker, not the crook who tried to usurp his good name.