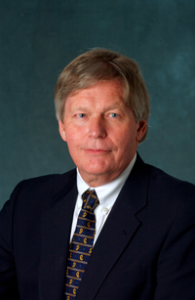 Dr. Daniel N. Baker is Director of the Laboratory for Atmospheric and Space Physics, University of Colorado – Boulder and is Professor of Astrophysical and Planetary Sciences and Professor of Physics there. He holds the Moog-Broad Reach Endowed Chair of Space Sciences at CU. He has edited eight books and published over 750 papers in the refereed literature. He is a Fellow of the American Geophysical Union, the International Academy of Astronautics, the American Institute of Aeronautics and Astronautics, and the American Association for the Advancement of Science. He was elected in 2004 as an Associate of the U.S. National Academies and is a member of the U.S. National Academy of Engineering. Dr. Baker was chosen as the 2007 winner of the University of Colorado’s Robert L. Stearns Award for outstanding research, service, and teaching and was the CU Distinguished Research Lecturer in 2010. Dr. Baker was also the 2010 winner of the AIAA James A. Van Allen Space Environments Medal. He was the 2012 recipient of the American Astronomical Society (SPD) Popular Writing Award and Prize and delivered the Van Allen Lecture at the 2012 American Geophysical Union meeting. He currently is lead investigator on several NASA space missions including the MESSENGER mission to Mercury, the Magnetospheric Multiscale (MMS) mission, and the NASA Radiation Belt Storm Probes (RBSP, now renamed the Van Allen Probes) mission. He was a member of the 2006 Decadal Review of the U.S. National Space Weather Program and recently chaired the National Research Council’s 2013-2022 Decadal Survey in Solar and Space Physics.

Just over 2 years ago, the Earth and its 7 billion inhabitants narrowly averted an extraordinary calamity. Missing a direct hit on our planet by perhaps a week or less, a blast from the Sun headed straight for a NASA solar monitoring spacecraft well away from Earth. This spacecraft, STEREO-A, measured the remarkable properties of this once-in-a-generation space storm.

The story of the July 2012 storm, in a sense, began some thousand centuries ago when a quantum of light—a photon—was launched within the nuclear furnace at the heart of our nearest star.

For the following eons, the photon and its similar companions made their way out through the Sun’s dense core. They then emerged from the so-called radiative zone only to be swept up in the roiling outer layers of the Sun that together are called the convective zone.

In this swirling cauldron that gives rise to the Sun’s magnetic dynamo, the photons found themselves in an active magnetic region that would give rise to huge x-ray flares and would ultimately release the powerful coronal mass ejection that struck STEREO-A.

Had Earth been there instead of the satellite, much of modern technology—from power grids to communication satellites to global navigation systems—could have been disrupted or severely damaged.

How many such storms have occurred over the Sun’s lifetime, no one knows. Only over the past few decades have we had space-based platforms to record them. But what we do know is that our modern society is ever more susceptible to the debilitating effects of harmful space weather.

The Earth and all its inhabitants were exceptionally lucky that the July 2012 event occurred just when it did. But in the future, we cannot depend solely on good fortune.

And all of us—scientists, policy makers, and average citizens—must be aware of space weather and we need to prepare to deal with the possible consequences of the most intense of such devastating events.