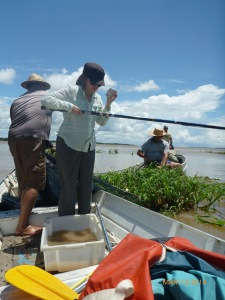 The discovery of a new species is always exciting!

Dr. Cristina Cox Fernandes, an lecturer at UMass Amherst, chronicles the discovery of a new species of fish and the importance of continuing search, find and document new species.

Cristina Cox Fernandes is an ecologist and ichthyologist with more than 25 years of experience in the Brazilian Amazon. A lecturer and adjunct research associate professor, she teaches Ichthyology and Amazon Aquatic Ecology at UMass and has taught different courses at the Instituto Nacional de Pesquisas da Amazônia (INPA), Manaus. Brazil. She received her Ph.D. at Duke University, and conducts collaborations with Brazilian and American researchers.

When we survey an area in the Amazon, our first interest is to document both familiar and new species, so that we can know something about the species level diversity of that particular area.

Discovering new fish species in the Negro River, deep in the Amazon rain forest of Brazil, also helps biologists to reach a new understanding of classifications and interrelationships among closely related groups. And, as the diversity of electric fishes becomes more thoroughly documented, we researchers will be able to explore possible causes of fishes speciation and divergence in the environment over evolutionary time. 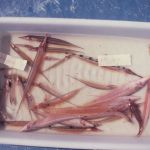 Sample with many electric fishes 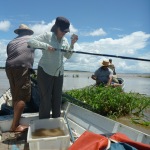 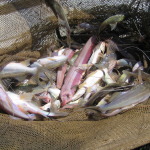 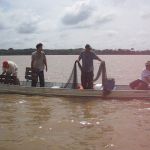 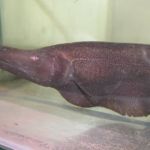 Parapteronotus hasemani, a species sexually dimorphic which males have a really long snout when compared with females

More basically, new discoveries are helping us to fill in details about poorly-studied fishes that live in one of the most diverse ecosystems on the planet, that touches parts of Bolivia, Brazil, Colombia, Ecuador, Guyana, Peru, Suriname and Venezuela. Along with Brazilian scientists, some of my work has focused on describing species of electricfishes. As you might expect from their name, electric knifefishes are long and thin. They have one main, very strong fin that runs along most of the underside of their bodies, which allows them to swim equally well forward and backward.

They are mainly nocturnal and feed on the bottom of the river, mostly eating aquatic insect larvae and zooplankton. A major feature of these fish is that they have evolved a weak electric organ that helps them to navigate, find food and communicate with each other in dark, murky water at night. Only one species, known as the electric eel, has a strong enough electric charge to be felt by a human. They use electric this powerful discharge to stun prey. Electric discharges in the other species are very low voltage.

Over the past decade, scientists have discovered that each species of electric knifefish produces a distinct electric signature, and they use these signatures to recognize each other. Therefore when we describe a new species, one of our goals is to describe particular patterns of electric organ discharge such as pulse waveform, duration, amplitude, phase and frequency. We also describe species’ geographic range, relationship to other fish, features of its skeleton, and color.

In the last year, our work has focused on providing new details about the most abundant species of knife fishes, known as the “ghost knife fishes,”. These fishes are very small, typically less than 20 cm, but are very common in the large river channels in the Amazon and its tributaries.

In the early 1990s, when we began our studies on electric fish communities and diversity, fewer than 100 species were scientifically described. But today that number has roughly doubled, as more biologists focus on the ecology of the region that is so important to the Earth’s biodiversity.

Electric fishes are of little commercial importance, and as such have escaped the notice of most people including fishermen. Yet these fishes are susceptible to ongoing environmental hazards such as pollution, climate change, hydroelectric dam construction, and habitat loss, hazards that are affecting rivers and freshwater fauna worldwide.

This makes it all the more urgent to document current fish fauna.