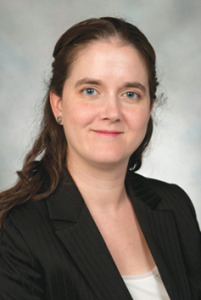 Dr. Kirstin Matthews, fellow in science and technology policy at Rice University, addresses the patenting process in the biotechnology field.

Dr. Kirstin Matthews‘ research focuses on ethical and policy issues related to biomedical research and development. Specifically, Dr. Matthews is looking at intellectual property rights for biotechnology, including genetics and stem cell related patents, the development of scientific research collaborations and ethical issues related to emerging biomedical technologies. Along with Baker Institute fellow Steve Lewis and Baker Institute Rice scholar Elaine Howard Ecklund, she is a co-principal investigator on a project that surveys and interviews scientists around the world to compare how they view science, religion and ethics.

In June 2013, the U.S. Supreme Court ruled in the case Association for Molecular Pathology v. Myriad Genetics that naturally occurring genes are unpatentable.

Until the Supreme Court’s decision, Myriad Genetics was the only company in the U.S. that could legally conduct diagnostic testing for BRCA 1 and 2, genes that are linked to familial breast and ovarian cancer. The company was granted both patents by the U.S. Patent and Trademark Office in 1998 and 2000, respectively.

Over the past decade, Myriad Genetics aggressively dominated the field by suing other companies who tried to enter the market while also limiting research and development of new tests for the genes.

The court decision to overturn the patents now opens up the field for new and improved diagnostic tests for these two breast cancer genes.

The case also launched a contentious debate about the ability to patent life. Before the case the Supreme Court allowed scientists to patent anything under the sun made by man. This policy included genetically altered animals, modified cells or organisms and DNA. The Myriad case now leaves us asking: How do we now distinguish between what is simply discovered and what is truly “made by man”?

The Myriad Genetics case highlights questions about the current patent system and provides opportunities for its improvement. Biotechnology scientists, in particular, must be aware of the broad and perilous patent landscape as they conduct their research and develop new technologies.

Today, approximately half a million patents are filed every year in the U.S., and this number is growing. Patent officers are overwhelmed, and the process from filing a patent to approval now takes over two years.

Currently, there is no outside review of patents before they are granted, and there are not many opportunities to challenge patents once they have been granted. The options that are available are costly and mostly limited to long, drawn-out lawsuits. Such lawsuits could be prevented by implementing simple changes to the system, including having outside review of patents before they are granted, reforming the rules of patent licensing to minimize restrictive practices and requiring more detailed patent descriptions to prevent expensive and disruptive lawsuits.

The Myriad case helped refine the biotechnology patent landscape by showing the limits of what biotechnology can and should be patented. This decision will help spur innovation by allowing new research and technology to enter the market without one player dominating the field.