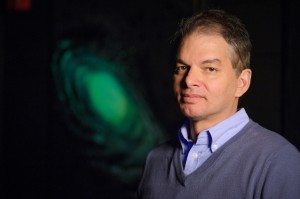 Dr. Chris Adami is a professor of physics & astronomy and microbiology and molecular genetics at Michigan State University. His research is working to improve upon Dr. Stephen Hawking’s landmark theories about the universe.

From the simplest molecules, to the most complex structures of the human brain, Chris Adami knows evolutionary design. Chris is a computational biologist with a focus on theoretical, experimental, and computational Darwinian evolution, and a Professor of Microbiology and Molecular Genetics & Physics and Astronomy at the College of Natural Science at Michigan State University where he heads up the Adami Lab. He is focused on finding meaning in the simple rules that give rise to the most complex systems and behaviors.

Chris earned a B.S. in Physics and Mathematics and a Diploma in Theoretical Physics from the University of Bonn in Germany, and M.A. and Ph.D. degrees in Physics from Stony Brook University in New York. He has pioneered the application of methods from information theory to the study of evolution, and is responsible for development of the sophisticated “Avida” system. Avida, an artificial life simulator, uses mutating and adapting computer viruses living in a controlled computer environment as a tool for investigating evolutionary biology.

In addition to citations in all areas of evolutionary science, Chris authored the textbook “Introduction to Artificial Life” (Springer, 1998). He was a principal scientist at the Jet Propulsion Laboratory at NASA, where he conducted research into the foundations of quantum mechanics and quantum information theory. Chris is the recipient of NASA’s Exceptional Achievement Medal, and he was also elected as a Fellow of the American Association for the Advancement of Science (AAAS) in 2011.

When Stephen Hawking published his black hole theory in 1975, it caused a worldwide scientific debate that has shown no sign of waning.

You see, Hawking found that black holes aren’t all black, but emit radiation that slowly consumes the black hole until eventually it evaporates and disappears. He concluded that information—and anything else that might have entered the black hole in the past— would be irretrievably lost. But according to the laws of physics, information is special: it can never disappear completely because that would make the universe unpredictable. And that is simply not allowed.

While I am somewhat of a newcomer to the field of quantum gravity, I come to the problem from the field of quantum communication theory, which I helped develop in the mid nineties. Using these tools I found that the solution to the black hole information paradox was hiding in plain sight all along. It was already present in Hawking’s original work, yet completely overlooked.

In work that just appeared in the journal Classical and Quantum Gravity, I outline the complex solution to the disappearance of information. It turns out that besides the radiation that Hawking discovered, the black hole emits another type of radiation when you throw something into it. This stimulated radiation was actually discovered by Einstein almost a hundred years ago, and it is what makes Lasers possible. This previously overlooked radiation consists out of exact copies of the bits we throw into the black hole, making the black hole glow in the information that we thought lost.

Black holes have kept physicists up at night for many years. I believe the hole in the theory punched by the information paradox is now plugged, and black hole theory is complete, essentially in the way Hawking wrote it. And I can finally sleep at night!