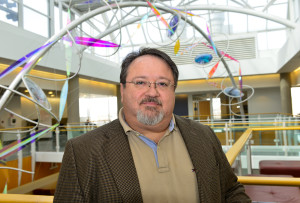 According to new research from Dr. Stefan Sarafianos, a professor of microbiology and immunology at The University of Missouri, compounds present in soy may be effective in helping resist the HIV virus.

Dr. Stefan Sarafianos, associate professor of molecular microbiology and immunology in the Bond Life Sciences Center at MU and joint associate professor of biochemistry in the University of Missouri School of Medicine, received his bachelor of science degree in chemistry at the University of Patras, Greece, and his PhD in biochemistry from Georgetown University. His work focuses on unraveling the molecular details of how biomedically-relevant enzymes function, how they are inhibited, how they develop drug resistance and towards developing drugs that will treat human disease including HIV/AIDS. Target proteins include HIV-1 reverse transcriptase, SARS RNA-dependent RNA polymerase, SARS 3cl protease, Hepatitis C virus replicase, Hepatitis B reverse transcriptase, and bacterial RNA polymerases.

For HIV patients being treated with anti-AIDS medications, resistance to drug therapy regimens is commonplace. Often, patients develop resistance to first-line drug therapies, such as Tenofovir, and are forced to adopt more potent medications. Our team at the University of Missouri has been testing the next generation of medications that stop HIV from spreading, and we are using a molecule related to flavor enhancers found in soy sauce, to develop compounds that are more potent than Tenofovir.

Patients who are treated for HIV infections with Tenofovir, eventually develop resistance to the drugs that prevent an effective or successful defense against the virus. EFdA, the molecule we are studying, is less likely to cause resistance in HIV patients because it is more readily activated and is less quickly broken down by the body as similar existing drugs.

In 2001, a Japanese soy sauce company inadvertently discovered the EFdA molecule while trying to enhance the flavor of their product. The flavor enhancer is part of the family of compounds called “nucleoside analogues” which is very similar to existing drugs for the treatment of HIV and other viruses. EFdA samples were sent for further testing, which confirmed EFdA’s potential usefulness against HIV and started more than a decade of research.

EFdA, along with eight existing HIV drugs, is part of the class of compounds called nucleoside reverse transcriptase inhibitors, or NRTIs.

In our latest study, my colleagues and I, including researchers from the University of Pittsburgh and the National Institutes of Health, helped define how EFdA works on a molecular level. Using virology techniques and nuclear magnetic resonance spectroscopy NMR, we pieced together the exact structure and configuration of the molecule. Compounds developed by our team currently are being tested for usefulness as potential HIV-halting drugs with pharmaceutical company Merck.

The structure of this compound is very important because it is a lock-and-key kind of mechanism that can be recognized by the target. While EFdA works extremely well on HIV that is not resistant to anti-AIDS drugs, it also works even better on HIV that’s become resistant to Tenofovir.