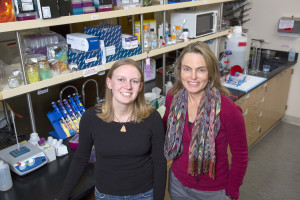 “They may be more resistant to climate change than we thought” says Dr. Denise Dearing in an article that originally appeared on University of Utah News Center website.

She’s talking about pikas. These rabbit-like mammals are being forced to adapt to the changing climate.

Denise Dearing is studying the evolution of pika diet and observing how these cute little creatures are learning to survive amid changes in their environment.

Climate change is forcing many animals uphill into cooler habitat, but one species has developed a trick to survive in the lowlands. In Oregon, pikas are eating moss. 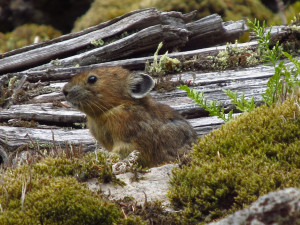 Pikas are small mammals related to rabbits, and they are extremely sensitive to heat. For this reason, they are typically restricted to high elevations in the mountains, and in parts of their range, they are being forced upslope by climate change. But just outside of Portland Oregon, pikas live near sea level in warm, temperate rainforests. The climate here appears to be completely unsuitable for them, and for decades, people have puzzled over how pikas were able to make a living here.

My graduate student, Johanna Varner, set out to solve this mystery. She observed hundreds of hours of pika behavior and measured temperatures in many rockslides that are home to pikas across the region. We found a relatively simple answer to the pika’s success at low elevations: moss.

Although moss is nutritionally similar to cardboard, it is widely available on the rockslides where the pikas live, and they can eat more of it than any other mammalian herbivore. Eating locally lets the pika hipsters forage from within the rock pile instead of leaving the boulder field, where they might be exposed to predators or heat stroke. Like a green roof or a swamp cooler, the moss also cools the spaces between the rocks, keeping the temperatures that the pikas actually feel at roughly the temperature of a refrigerator.

So, in this region, low elevation pikas may be more resilient than we previously thought because the moss provides them with abundant food and stable, cool temperatures. We can’t yet say whether or not these results can be generalized to other populations of pikas, who may still be very vulnerable to climate change. But maybe they’ll stand a chance, if they can adapt their diet.