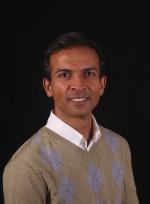 A University of Utah scientist is making engineering breakthroughs in the field ofplasmonics using ink-jet printers.

Dr. Ajay Nahata, professor of electrical and computer engineering at the University of Utah, is developing new technology using parts borrowed from some somewhat old technology!

Over the last half century, there have been tremendous advances in computing and communications. Commercial semiconductor technology, such as an Intel processor, operates at a frequency of approximately 3 GHz. There is great interest in dramatically increasing this operating frequency. By doing so, it may be possible to greatly speed both computing and communications, for example, transferring an HD movie between devices in a fraction of a second instead of hours. This is one of the goals of terahertz technology, where 1 terahertz equals 1000 gigahertz.

Unfortunately, conventional electronics have limitations that make it difficult to work at such high frequencies. Therefore, terahertz technology incorporates a mixture of optical and electronic techniques.

However, there has been relatively little progress in developing such devices. The primary reason for this is that many conventional materials, such as crystals, polymers and semiconductors, absorb terahertz radiation too strongly. However, metals and air exhibit extremely low loss. There is a relatively new field of optics that takes advantage of this.

It is referred to as plasmonics, in which light moves only along the boundary between a metal and a non-metal. In the usual approach to creating plasmonic structures, one would take a uniform metal film and shape it to get the desired response. While this works well, it would be preferable if one could also change the conductivity of the metal across the surface. This is not easy to do even with advanced fabrication facilities. However, it is easy to do with a low cost inkjet printer. By putting highly conductive silver ink in one cartridge and poorly conducting carbon ink in another cartridge, we can print a plasmonic structure where we can vary the conductivity spatially in any pattern we want, much the way that you can change colors easily in a printed image.