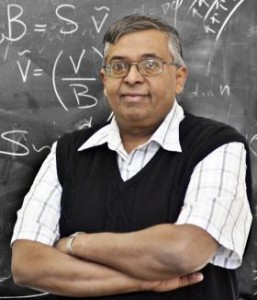 Jayanth Banavar, dean of the College of Computer, Mathematical, and Natural Sciences (CMNS) at the University of Maryland, discusses how geometry plays a significant role in development and evolution.

Jayanth Banavar is the dean of the College of Computer, Mathematical, and Natural Sciences (CMNS) at the University of Maryland. Though he is a distinguish physicist, his research frequently crosses into the field of life science. He received a BS and an MS in physics from Bangalore University and earned his Ph.D. in physics from the University of Pittsburgh. He has more than 250 publications in refereed journals, 11 book chapters, a book he co-edited, and three patents.

Living organisms span an enormous range of sizes—from bacteria weighing a trillionth of a gram to blue whales weighing more than 200,000 pounds. Living organisms also span an enormous range of shapes. Consider animals and trees—two dominant forms of life that have very different geometries. Humans have a uniform tissue density, whereas a tree’s mass is concentrated in its trunk and branches.

We have a heart, but trees do not. Animals are mobile; trees are rooted.

To better understand these differences, scientists can study how evolution shaped these two distinct geometries of life. They can also examine the relationship between the rate at which an organism burns energy and its mass.

In a recent paper published in the Proceedings of the National Academy of Sciences, my colleagues Todd Cooke, Amos Maritan, Andrea Rinaldo, and I found that animals and trees of a given mass have about the same energy efficiencies. Our results provide a simple and general explanation for an empirical law deduced nearly 75 years ago by the Swiss biologist Max Kleiber.

Our theory makes predictions about lifetimes, heartbeat rates, the tapering of a tree trunk, and many other phenomena linked to the metabolisms of living things. Our findings suggest that animals and trees have independently evolved within the constraints imposed by geometry and the laws of physics to achieve maximal energy efficiency—a beautiful example of convergent evolution.