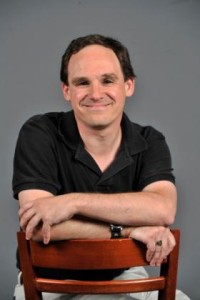 Where do galaxies get their gas?

D.J. Pisano, assistant professor in the Department of Physics and Astronomy at West Virginia University, is studying chemical elements present in space to unlock mysteries of the universe.

Dr. D.J. Pisano is an assistant professor in the Department of Physics and Astronomy. He received his BS degree from Yale University in 1996 and his PhD from the University of Wisconsin-Madison in 2001. Prior to arriving at WVU, he held post-doctoral positions at the Australia Telescope National Facility, the Naval Research Laboratory, and the National Radio Astronomy Observatory in Green Bank, WV. Dr. Pisano uses radio telescopes to research how galaxies form and evolve.

Imagine that you have a friend who arrives at your house after driving across the country.  Her car has a full tank of gas. Since you know that a car cannot travel thousands of miles without refueling, you can safely assume that your friend must have refilled her gas tank during her journey.  You can think the same way about the universe.

Since the amount of hydrogen gas in galaxies has remained remarkably constant over the past 10 billion years, despite galaxies converting large amounts of that gas into stars, we know that galaxies must have obtained more gas from their surroundings. So far astronomers have only been able to find about 10 percent of the neutral hydrogen gas that galaxies need to acquire in order to sustain continued star formation and maintain their “full tank of gas”.

Where is the missing gas?

One possibility is that the hydrogen gas is so faint and diffuse that it has been missed in past surveys. This gas is predicted by current theories to be distributed in filamentary structures that feed the gas onto galaxies.  Using the Green Bank Telescope in West Virginia, my collaborators and I are looking for these structures.  In a recent study of two galaxies, we find that both galaxies have some diffuse gas extending from their disks, but one appears to have a diffuse hydrogen filament that connects it with a couple of nearby companion galaxies.

This filament may be the debris from a past close encounter of the galaxy with its neighbors.  In this case, the filament should also contain stars.  Alternatively, this filament may represent material falling onto the galaxy from intergalactic space, in which case such features should be common around other galaxies as well.  We are now working to test both possibilities and unravel the mystery of where galaxies get their gas.